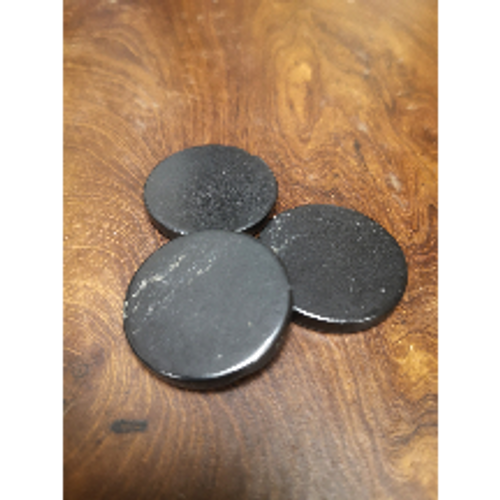 Shungite Protection Plates for your Electrical devices such as smarphones, wifi, ipads and tablets emit emf radiation to our bodies. Stick the shungite protection phone plate on the back of your phone to emit emf's, 5g radiation. Shungite circular protection plate 30mm diameter 3mm thick, with adhesive back. 100% Authentic premium shungite imported from the Zazhoginsky mine in Karelia Russia.

Shungite is a unique Precambrian carbonaceous natural mineral of organic origin that can be found in its raw form only in the Republic of Karelia, the Russian Federation, where the only deposit of this amazing mineral is located. The stone received its name from the name of a small village called Shunga where it was first discovered. Shungite stones can be divided into three types depending on the content of carbon in it. Type III and type II shungite is usually called regular shungite stone and they contain from 30 to 50 percent of carbon and from 50 to 90 percent of carbon respectively. Shungite with the carbon content of more than 90 % has silvery surfaces and is called elite shungite.

Nowadays shungite can be also referred to as a magical stone, a stone of life or a healing mineral due to its multiple healing, curative and protective properties that go back far more than several generations. Some experts claim that the mineral is approximately 2 billion years old and it starts its existence long before life existed on Earth.

Electromagnetic Radiation and Geopathic Stress: How to Shield Yourself with Shungite

Over the last few years people have become more concerned about EMF radiation. We are hearing more and more about harmful influence of cell phones, computers and TV sets on our health. Nevertheless electronic gadgets have become an integral part of our modern-day world, and we can’t easily exclude them from our daily life. So, this raises the question: what can protect us from radiation without changing our habits.  The answer is simple – shungite! This magic stone is prominent for its protection properties. Shungite products are the best solution for those who suffer from electromagnetic hypersensitivity.

Why are geopathic stress and EMF radiation so dangerous and harmful for people’s health?

It was scientifically proven that EMF and geopathic stress make human body vibrate at higher frequencies than normal and can affect the immune system, making people more sensitive to viruses, bacteria, parasites, environmental pollution, degenerative disease, and a wide range of health problems. In 2010-s, a group of independent scientists from 10 countries prepared a report, aimed at revealing the correlation between electromagnetic fields and people’s health. According to the Report, people who suffer from electromagnetic hypersensitivity face such problems as chronic fatigue, regular stress, decreased attention span, memory loss, depression, anxiety and insomnia. Moreover EMF and geopathic stress can cause more serious health problems such as increased blood pressure, heart rate and blood sugar, arthritis. Also it can affect the reproduction ability and increase cancer risks. Even notable organizations such as the International Agency for Research on Cancer (IARC), a component of the World Health Organization (WHO), don’t deny EMF negative effects. In its recent statement, the IARC conceded that EMFs are "possibly carcinogenic to humans."

Do EMFs affect you?

Check the list of major EMF-sensitivity signs to find out:

Shungite as a natural protection

If you notice at least one of the signs, it would be wise to consult with a doctor as well as to try shielding yourself. There are multiple ways to reduce harmful influence and protect you from EMF and geopathic stress. The simplest one is to minimize the usage of your electronic devices. However in our age of sophisticated technologies it seems to be impossible. We can’t imagine our life without smart phones and computers. But we can make their usage safer and less harmful for health.

The most efficient and cheapest way to reduce radiation influence is shungite. The stone is widely known by its absorbing and protecting properties. Shungite is a natural geomagnetic material with a strong screening effect neutralizing high frequency and microwave frequency electromagnetic radiation. One more significant advantage of shungite stones is that they don’t have date of consumption, you can use them unlimitedly. The only thing you need to do in order to maintain their efficiency is cleaning and charging your stones on regular basis.

Shungite is a powerful grounding crystal. Healing energy of the stone relieves stress and anxiety, imparts the sense of calm and balance and protects from negative vibrations. Besides,shungite stone has a positive impact on physical health strengthening immune system, improving blood circulation, relieving pain in joints and muscles.

As crystal healing is all about interaction with stones there are numerous ways you may incorporate shungite curative energy into your daily routine. For example, you may create a crystal grid combining shungite with other healing crystals to amplify their energy, or you may speak affirmations with your shungite crystal in the morning and then keep the stone in the pocket to keep your intention with you throughout the day.

The Priestess by Ruth Thompson 27cm